Naitauba within the Fijian Community 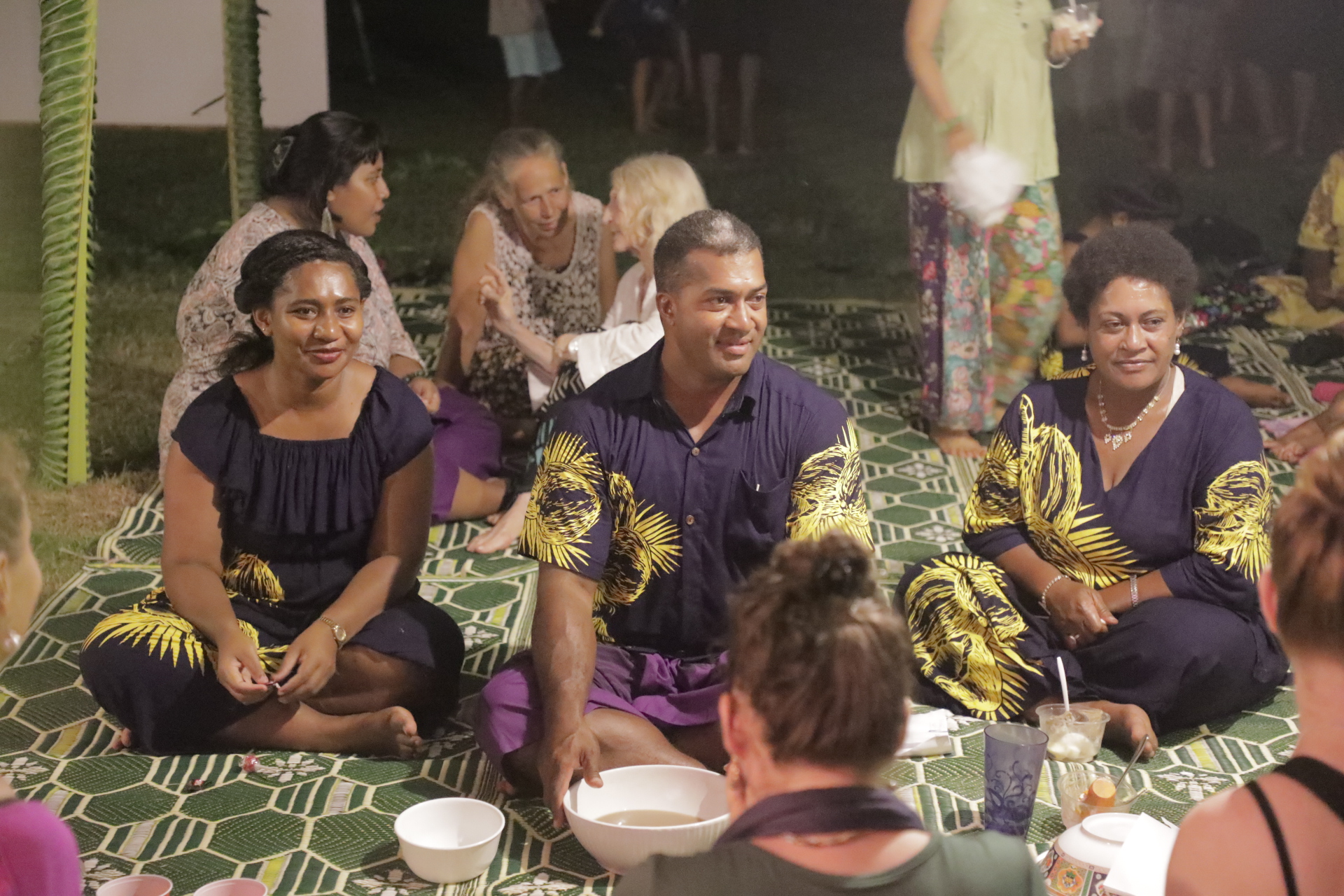 Naitauba within the Fijian Island Community

Adi Da Samraj taught the importance of respecting and understanding the traditional cultures of Fiji.

Fiji is noted for its beauty and benign climate, its history of religious pluralism and tolerance, and its freedom from some of the worst excesses of environmental disturbance. Naitauba Island, located in the Northern Lau island group, is blessed with great natural beauty and tranquility.

When Adi Da Samraj first arrived in Fiji in 1983, He was impressed with the friendliness of the people. He was also struck by the signs of cooperation in the way Fijians lived. From the day of His arrival, Adi Da taught His devotees the importance of respecting and understanding the traditional cultures of Fiji, which are often closer to true spiritual and religious culture than the modernized cultures of the West. Many of these cultural values center around customs of respect between people. Adi Da asked His devotees to study the traditional customs of respect, and to meet and approach our new neighbors in the traditional way.

While Adidam devotee residents serve the island’s religious functions and attend to the needs of visiting retreatants, local people also play an important role at Naitauba. The island is a significant employer and contributes substantially to the regional economy. The roads, buildings, farm, gardens and utilities are maintained by staff from neighboring islands and villages in Cakaudrove province and elsewhere in Fiji. Skilled positions such as mariners, carpenters, electricians, mechanics, plumbers, farmers and other trades are much in demand on Naitauba. Local staff include Fijians of various ethnicities and religious faiths who live together in an atmosphere of tolerance and harmony which is often remarked upon by visitors to the island.

Local permanent staff and their families number about 120 people who are accommodated in a village-like residential complex a short walk from Naitauba’s retreat facilities. Amenities provided include a church, a large community hall, and a new school building which doubles as a cyclone refuge. All buildings are well-constructed, with electricity and running water, amenities that are not always available in the outlying islands of Fiji where Naitauba is located. The primary school enables local children to obtain an education without leaving their homes to attend schools on larger islands.

Naitauba has a resident medical doctor and a professionally-staffed medical clinic, which caters to the needs of all island residents and staff.

Adidam has invested considerable resources in Naitauba since 1983 and the economic benefits to Fiji  are felt well beyond the island.

Due to the regular influx of visitors from around the world to transit points such as Taveuni, Suva, and Nadi, Naitauba rivals sizable resorts in the money its members spend on their visits to Fiji.

To support the continuous construction and maintenance on the island, materials, equipment, and specialized skills are sourced from throughout Fiji, particularly from the capital city Suva. The Naitauba administrative office in Suva also employs as many as 10 local staff.

In addition to the benefits Naitauba offers as employer and source of visitor revenue, local communities in Northern Lau receive regular support from Adidam members on behalf of Naitauba. Particular emphasis is on schooling for children and on projects which support traditional values and customs. Since 2005 Naitauba has supported a much-valued scholarship program which helps students from Naitauba and Kocoma village in Qamea to attend secondary schools elsewhere in Fiji. The Dau Loloma Scholarship Fund, established in Adi Da’s name, helps needy secondary students in Vanuabalavu with school expenses. Many textbooks have been donated to Vanuabalavu schools, and annual awards for scholastic and sporting achievements, traditional crafts, and home gardens are given to both primary and secondary students. Over the years, donations and technical expertise have helped develop village water supplies, purchase a community boat, and construct new school buildings on neighboring islands.

Naitauba’s agricultural facilities include reservoir and irrigation systems as well as large vegetable and ornamental gardens, greenhouses, and orchards producing tropical fruits. The consistent demand for fresh produce also benefits farmers in Taveuni, where Naitauba staff have helped train and support more than 25 farmers to convert to organic farming methods and to provide produce for Naitauba as well as local resorts.

After Cyclone Winston caused extensive destruction in 2016, Adidam members and friends donated funds for the construction of a reinforced school building on Naitauba, engineered to Category 5 cyclone standards, which doubles as a cyclone shelter for staff and their families. Naitauba also made donations to the Prime Minister’s National Disaster Relief and Rehabilitation Fund after cyclones Winston and Tomas.

Naitauba sometimes receives distress requests to send marine vessels and crew to rescue boats adrift at sea. Taveuni and Vanuabalavu police have expressed their appreciation for Naitauba’s assistance in these situations. Naitauba also offers neighboring outlying islands the services of its medical clinic and resident doctor in emergency situations.

In anticipation of rising sea levels due to climate change, all significant new buildings on Naitauba are being constructed at higher elevations. As an example, the new school / cyclone-refuge and a large new storage building were recently constructed well above sea level.  A New Zealand engineering firm has been assisting with infrastructure design and site planning at higher elevations